Posted on September 1, 2016 by clairesallotment

With the kids going back to school very soon (Emily this Friday and George on Monday), today was the perfect opportunity to go out for one last adventure. The weather was gorgeous so we decided to go to Sissinghurst Castle Garden. 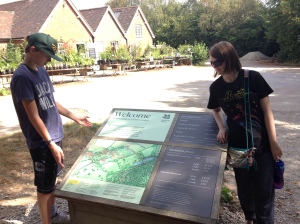 Ready for another adventure.

We have been here before, but not for a couple of years. It takes us about an hour and a half to drive there, but the roads were fairly clear, although we got stuck on the A21 for a bit due to the road works. But that wasn’t going to dampen out mood. We arrived just in time to have our picnic lunch, so we found a shady spot and munched away. Once we’d eaten enough then we went into the Castle Gardens. We climbed the steps to the tower and the views from the top were amazing. You could see all around the gardens and beyond. George asked me a very strange question, he comes out with very strange things often, so I’m never phased by what he says. Now before I tell you what he said, let me explain that my mobile phone is in a “Survivor case”. Apparently the military used them and a tank can run over the case and the phone will still be intact. I’ve not tried this, but I’ll take their word for it. George asked me, “Mum if we drop your phone from the top of the tower, do you think your case will stop it from breaking?” My reply was, “If you do that and it breaks, you’re buying me a new phone!” We didn’t try it, just incase you’re wondering. 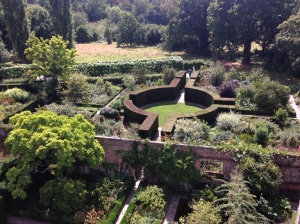 View from the top.

Once we’d come down (the steps not jumped off the top of the tower), we wandered through the gardens. They are beautiful will loads of secret sections. It’s so relaxing and exciting to find yet another secret garden hiding round the corner. If we had a garden like this, Emily said we’d have to have a bell to call the rest of the family in for meal times. Or they could ring it and ask where I was hiding. We came across a stone seat that you weren’t allowed to sit on, due to the fact that the sitting part of the seat had plants growing on it. 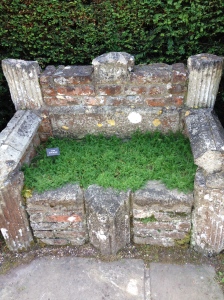 No sitting on this seat please.

We explored all over, and had a wonderful time. We also found a “White Garden”, that had only white flowers growing in it. I never realised how having just one colour in an area could be so attractive. 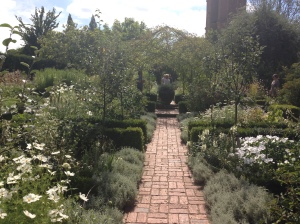 The White Garden. I don’t think the Queen of Hearts would be very happy.

We found a rather green looking moat that you really didn’t want to have a swim in. When George was a toddler I went to see Dick Smith, an old friend of mine (sadly he’s no longer with us) and in his garden he had a sunken old bath. You can see what’s going to happen can’t you? This bath was full of water and had green algae all over the top. We were wandering round Dick’s garden and George made a bee line for this water. He fell straight in, and immediately I grabbed him and pulled him out. He was soaking and covered in all this green algae. He didn’t cry or get upset, he seemed to enjoy it! We put him straight in the shower and for some strange reason I didn’t have a changed of clothes for him. So we had to borrow one of Dick’s white T-shirts and we tied a bit of rope round his waist. He looked like he was wearing a dress. Now he’s older, he’s slightly more wiser, so now he just sits by green water in the shade, contemplating the meaning of life, the universe and everything. 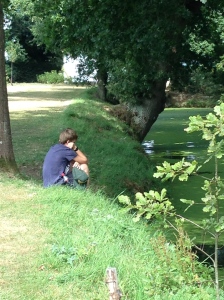 We then found the Boat House and the Orchard. We then left the Gardens and went to explore the rest of the estate. They have an Elizabethan barn that you can walk right through, it’s amazing and you could imagine it being used during the Elizabethan period. Then it was onto the place that I was so looking forward to seeing, and that was the vegetable garden. You needed to make sure you closed the gate properly because otherwise the rabbits would get in and eat the crops! They had rows of Sunflowers, Rhubarb, Onions, Squashes, Pumpkins, Brassicas, Beans, you name it, they most probably had it, it was just amazing. I was very jealous. The Parsnips still had lots of growing time left, and they were already massive!! Emily was especially taken with the pumpkins. Mine are no way as big as those ones, but they’ll do for this year. 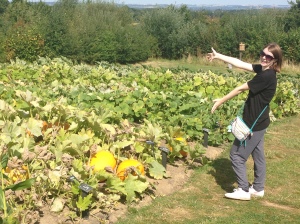 Emily by the Pumpkins patch. Lottie and Dottie would be proud.

After I’d drooled over everything in the vegetable patch, we then decided to go to the Bird Hide just down the path. We were on our way down there, when suddenly George let out a load of expletives. Now I never swear as you well know, “Oh botherations!” is the worst I say. Poor little love had been stung on the ear by a wasp!! Little bugger (the wasp not George). Tears welled up in his eyes, and we could see where it had got him. We sat in the bird hide for a little while, but George was still in a huge amount of pain, and his ear was really quite swollen, so we went to the main desk, but they didn’t have anything to help, so we went and got some ice from the cafe. Which didn’t help either. The kids had an ice cream, (which did help) and I had a drink. Once we’d finished our treat, we went into the shop to buy a little treat for Mark, because he’s stuck in an office all day. We had a little chuckle at some of the latest funny Ladybird books for Grown ups. When reading these you have to read as dead pan as possible. I think this is my favourite.

Wine features a lot in this book!

We then drove home and stopped at our local supermarket, to get some dinner and also something to help with George’s sting. It’s a little pen and seemed to do the trick. I’d better carry it around with me at all times now. So apart from Georges little prick it was a wonderful, fun day. I think they’ve had a lovely summer holiday. Now it’s back to school and work for me.