Posted on August 4, 2015 by clairesallotment

This afternoon the kids and I went to visit Claremont Landscape Gardens. It’s only about 6 miles from where we live, and a very pleasant drive which only takes about 15 minutes, but today took 20 minutes, because we were following someone in a 60mph zone who was barely going 40mph!! But we got there finally. The car park was full, but as we drove in the car park, a car was leaving, so we managed to find a space. We’ve been here before, but it’s always lovely to come back again just to have a wander round on a beautiful afternoon. The sun was in and out, but the breeze was rather challenging, but we didn’t mind. There were lots of families with small children around. You forget, when your kids grow up, how much stuff you have to take with you on a day out with little ones. They had various activities for the little ones to do, and a notice about a Punch and Judy show. Now I HATE THAT!!!!! If someone makes me watch it, I would smash the puppets faces in and everyone watching would be shocked. I find them hideous, evil and repulsive!!  But let’s move on very quickly from that horror, and get back to the beautiful gardens. We came across a wooden play area for 11 years and below. George is 13, but I let him have a quick play. He’s very caring when it comes to little ones, so I knew that he wouldn’t go roughing his way around. He climbed right to the top of the castle, I think some parents looked on in horror. But George is a good climber although Mark and I are the only ones who really understand.

Where’s George? Top left. He climbed up the outside of the castle to get to that point.

We then continued on our wander round the huge pond that is in the middle of the grounds and the ducks came over to see us. We had nothing to feed them, in fact you weren’t supposed to feed them, I can’t remember why. Some little ones were getting rather close to the edge, but the pond itself is only about 12 inches deep, still I wouldn’t want to fall in there’s a huge amount of pond weed growing. 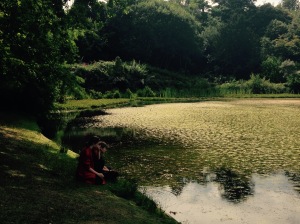 The beautiful pond at Claremont. So many spots to sit and have a think.

We did take some snacks with us, a packet of biscuits and some cheese straws, which we nibbled as we walked round. George found some more hills to climb and we then found some Shetland Ponies roped off in an area. They were having pony rides, but the ponies were on their break, so were having a bit of “Me time”. There are lots of secret parts to the garden, and you really have to explore to find them. The perfect garden to play hide and seek in. You could hide for hours and not be found. There is an area that is gated off and you’re not allowed to enter. It looks like a factory or some sort. It looks fascinating I wish they would open it up.

One of the many sections to explore.

Before we left George wanted to go for another play in the wooden play ground. So Emily and I sat near the pond and chatted and looked at the scenery. We then went to find George. Now just a bit of advise when looking for George in a play area, always look to the highest points first. You’ll find him faster that way. There’s no point in looking at ground level because he’ll never be there. Sure enough we found him climbing to the top of the castle again. When he saw us he gave us a wave. 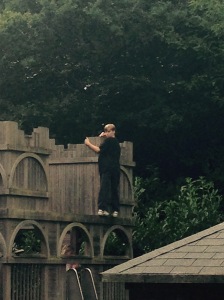 We then wandered back to the car to come home and George and I put up his tent in the garden because he wants to camp in it tonight. Hopefully he’ll sleep well and the chickens won’t wake him up too early tomorrow morning. As we were putting it together the chickens did look a bit worried, but once it was up they soon realise that it wasn’t for them and they didn’t need to be scared.

George’s little home for the night.