Posted on August 5, 2015 by clairesallotment

I’ve just got back from the allotment and thought I’d write about what I got up to before the kids and I had lunch. It was a very productive couple of hours working through various beds (in order of course) weeding, feeding and watering, and then harvesting, if there was anything to harvest. It’s August, of course there was stuff to harvest! The Sarpo Mira potatoes are coming along well. They’re not ready to harvest yet, but I’m guessing in about 3-4 weeks they’ll be ready to harvest. The leaves are still green and I wait until they’re all going brown before I harvest them. The Butternut Squash are growing well. I’ve got lots of varying sizes and more on the way, so hopefully I’ll have a good crop of those this year. When I came to the Kale, I harvested some for dinner tonight. The Cabbages are growing amazingly well. I’ve not harvest any yet, but it won’t be long. I harvested a load more Climbing French Beans. They’re now really getting going, and I seem to have to harvest them every couple of days now which is great. Not one plant has had a problem with black fly, I think it’s because I planted some nasturtiums next to them, but even those have only had a few. Either they’ve not been that bad this year or the ladybirds have been eating them all. I did have a load on my Broad Beans so maybe that’s why. Who knows, just one of those mysteries. I also put some more Strawberry runners in tyres. The path that they decided to grow on is slowly becoming a path again which is great. Before I left I went to see how my various squashes were getting on and I harvested 3. I’ve grown the little yellow ones called “Patty Pan” before, but the long one is new for me which is called “Tromboncino”. If you put them in the right place they look like a smiley face. 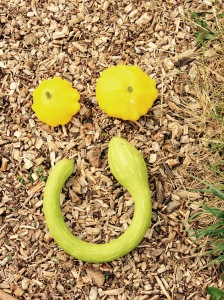 Well that was all for today. I’d better start lunch because “A” my tummy is grumbling at me, and “B” the kids will start complaining very soon.