Thursday 16th July 2015 – It’s surprising what you can get done when you put your mind to it!!

Today I was on my own, because Robbie was elsewhere. Still I managed to occupy myself for the 4 and a half hours I was on my plot for. I arrived just before 10am and had planned to give plot 2 a final inspection for any weeds that had been missed, then to trim any overgrown grass round the edges, harvest anything that was ready and then thoroughly water and feed the plants. I was very systematic with it all, and started at the beginning and finished at the end. When I came to the Kohl Rabi bed I found some rather bizarre shaped ones. Well I’ve grown them, so I guess that’s what I should expect. These 4 don’t seems to know that they’re supposed to be round! Still I’m sure they’ll taste good. 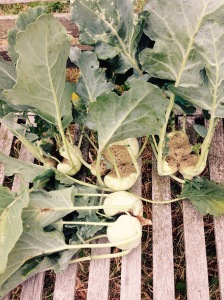 I think I should have told them they were supposed to grow round.

I harvested the last of the Peas, but have left the sticks in because I’ll plant some more Pea and Sugar Snap seeds tomorrow. Now comes the fun job of popping them all. I’ll ask the kids to help with that. I wonder how many we’ll loose? Then it was onto the bed with the Popcorn, some Pumpkins and the Graffiti Cauliflowers in. They’re all growing really well, especially the Cauliflowers. When I get those lovely bright purple heads on them, I’ll show you. 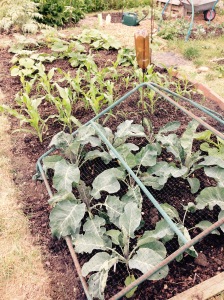 From front to back: Cauliflowers, Popcorn and Pumpkins.

In a bed up the end I have some Chop Suey Greens growing, and still have a little bit of spare space in that bed, so sowed the last of my Beetroot “Chioggia”, another row of Spring Onions “White Lisbon”  and another row of Radish “Black Spanish”

Now every year something grows so superbly fabulous. You never know what it’s going to be, but this year it’s my Cabbages. They’re already starting to get lovely and firm in the middle and measure about 12 inches across already. We all lovely cabbage (and that includes the chickens), so hopefully we’ll have lots to keep us going over the winter. I’ve got 15 growing, and the Kale is growing really well to. Must be a good year for brassicas. 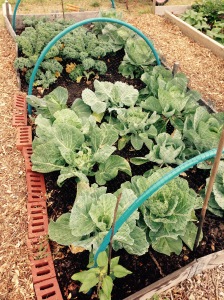 So here is a lovely view of plot 2, all beautiful and wonderful. Hopefully I can keep it at this standard all through the summer. 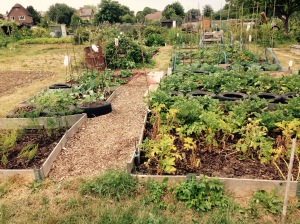 Apart from the compost heaps to sort out (a winter job), plot 2 is complete.

Then once that was all done I had my lunch and then started doing the same with plot 1. Now with Robbie’s help over the last 4 weeks, plot 1 is looking much improved, but still needs work if it wants to be at the same level as plot 2. But here is some of it as it looks now. The Rhubarb is growing well again, but I won’t be harvesting any more for a good couple of weeks at least. I’ll just keep watering and feeding it well, and I’ll start to grow very soon. 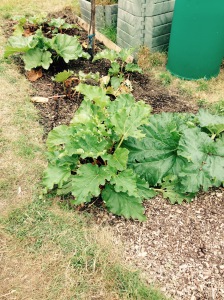 Rhubarb is growing again. Time to harvest some more in a couple of weeks.

I then titivated the bed where the Parsnips, Onions and Carrots are growing. I had to sow some more carrot seeds because, either the ants keep running off with the seeds, or the slugs are eating the tops. I had the same problem last year. I’ve now put some pellets on top of the row I’ve sown so hopefully that’ll sort out part of the problem. It also means that you know where to water which is always a good thing. After all that, it was getting on for 2.30pm and time to go home. I would have stayed a bit longer, but George finished school at 2.30pm, and had forgotten to take his key with him (silly boy). I couldn’t have him sitting on the doorstep waiting for me, it’s just not fair. But before I went I wanted to take a picture of the greenhouse to show you how it’s getting along. The tomatoes are growing bigger and bigger, and I gave all the plants inside the greenhouse a thorough watering. 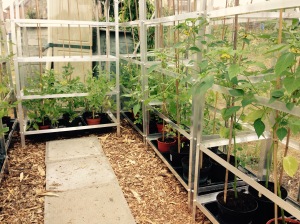 The greenhouse plants are growing well.

Well that’s all for today. More tomorrow, but I’ll only be on site for a couple of hours with Robbie (his final day with me). But I’ll let you know what we get up to tomorrow. I need a shower, I’m a bit stinky now!!

7 Responses to Thursday 16th July 2015 – It’s surprising what you can get done when you put your mind to it!!