My neck and back are better, but do still hurt, but I felt that going down to the allotment would not be the most sensible thing to do today, so I decided to stay at home and have fun with my plants here instead. I planted out both my Chives and Parsley in spare spaces in my herb patch.

My parsley growing….and not a lion in sight (only people of a certain age will understand that).

When I was planting out the Chives I put the tray a little too close to the chickens run and they tried very hard to peck it through their fencing at it. They did get some, but not much. I think they were a little disappointed that I wasn’t giving it to them. With all the spaces filled in the herb patch I still had some Chives left over, so I planted the rest out in the front garden in little spaces that I had. I also planted out some sunflowers which are all different varieties. Here’s a little tip if you didn’t know, slugs and snails don’t like chives, so if you don’t want to use slug pellets, then you can always surround a plant with chives. It acts as a barrier and our lovable gastropods will stay away. 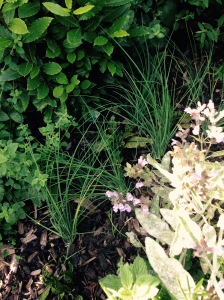 My Chives filling up some little spaces. They’ll come back every year.

The herb bed itself is looking really full and wonderful now. It’s so lovely to just pop out to the garden and pick some fresh herbs to use in dinner that night. The flavour is so much richer than the dried herbs you get. I’ll use fresh during the summer and then dried over the winter.

Part of my herb bed at home. It’s quite large and the chickens run is in the way to this was the best picture I could get.

Then it was time to get everything ready for the allotment tomorrow. I’ll put it in the car later after dinner, but I have to figure how to put the back seats down first on the new car. I’ve got another staging unit, some Tomatoes to put in it, and various other plants that will need to go out in the allotment soon, but I need to get then down to the allotment greenhouse then I know where they’re supposed to end up. I need to get some more compost to pot up the rest of the tomatoes, so I’ll most probably get that tomorrow and then carry on. I feel I’m making progress which is great.

Oh, and our old car was collected and taken away today. Whoever owns it next, please do look after it. It’s a great car, we loved it very much. I was a little teary as I saw it being driven away. Yes I know it’s just a car, but you get very attached to it, we’ve had it for 6 years and we’ve done a lot together, it’s like a member of the family.