Today I was off on my little trip to Birmingham, St Helens, Daventry then home. I had lots to fit in, and lots of people to see, so here goes, are you ready? I left home at 10am with my suitcase, lunch, cake, wine and money to make my annual visit to Gardeners’ World Live at the NEC in Birmingham. I stopped just south of Birmingham to have my lunch in a little National Trust Place called Baddesley Clinton. It was built in tudor times and has a wonderful little house that you can walk round and some beautiful gardens to while away some time in. When I arrived after the obligatory visit to the ladies room I sat down for lunch and instantly got surrounded by loads of ducks. There was a pond the other side of the grass and the ducks pestered everyone that came over for some food. Now I was hungry and didn’t think that they’d enjoy my garlic and coriander naan bread and my tomato soup, so they didn’t get anything from me. They were clearly very used to people and came really close. They even can under the table and right up to my feet, cheeky things. 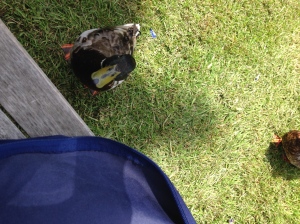 It’s my lunch, not yours.

After I’d eaten my lunch I went in the house. It was such a lovely old building, and part of the floor had been put down in the 1400’s!! I saw a priest hole that was also used as a loo. This was directly over the moat, so that anything that you did on the toilet fell straight in the moat. It doesn’t bare thinking about. You could also go upstairs to look at the rooms, which were all fairly small, and a scary 4 poster bed that had a rather scary face looking down at you as you laid on the bed. I wondered how many nightmares that gave the occupants. The doors were very low, so I had to duck to go through them all. Now I’m not huge at 5 foot 9, but you’d have to be shorter than about 5 foot 5 to be able to get through without ducking. 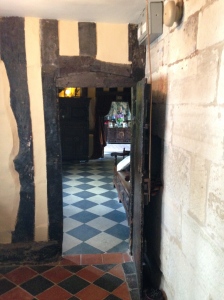 Tiny tiny doors. Not suitable for giants like me.

It was then time to wander round the gardens, there was a vegetable patch, which to be honest I wasn’t that impressed with. The Rhubarb was growing well and the rest of the fruit, but the vegetable were a bit hit and miss. Mine on the allotment were much further on. There was also several ponds and streams that you could walk by and round. All very tranquil and I could have stayed there for a lot longer, but soon I had to be on my way again. 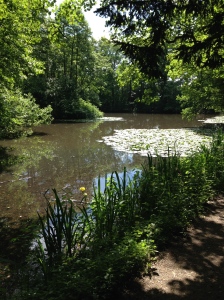 One of the many tranquil ponds to sit and contemplate the massive drive ahead.

But before I left there was a little church up the lane, so I had to go and see it, and find out if there were any bells, and a little bit about them. It was a tiny church, which from the outside looked locked, but was actually open and you were allowed to go in and have a look around. It was called St Michael’s Church Baddesley Clinton. So if you ever do pop to see the house make sure you pop to see the church also. 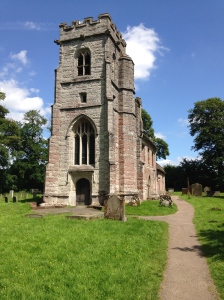 It looks quite a large church from the photo, but it’s really very small, but beautiful.

Their church bells were another matter. Now I’m used to ringing the big bells in the church, not little ropes like this. I didn’t have a play on them, as I know that you don’t mess about with bell ropes. But they did amuse me. 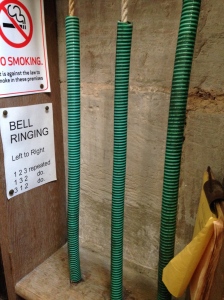 3 little ropes all in a row.

It was then time for me to continue on my journey to the Premier Inn in Birmingham, where I was going to spend the night. The stay was very pleasant, and the staff were very friendly. When asked by them “Did you have a safe trip?”, I replied “I don’t like the Birmingham one way system.” To which he replied “No neither do I.” It’s appalling!! There is no other word for it. If you don’t know where you’re going it’s a nightmare. Still I made it, and flopped down on my bed and had a cup of tea before I went downstairs to have dinner. Then off to bell ringing at Smethwick for the evening, where we rang all sorts and the ringers of that tower were very friendly. The tower captain was insistent that I tried all the bells during the evening, which I was able to do. I then got back to my hotel room very tired, and after a well earned bath, I sat in bed with a cup of tea and watched the TV till I got so tired I needed to sleep, after all Friday was going to be a HUGE day!!