After a marvellous breakfast at my hotel I headed off to the Gardeners’ World Live at the Birmingham NEC. I arrived just after 9.3oam, and the place was still rather quiet. It tends to get really busy from about 10.30am onwards until about 2.30pm, then calms down again. The weather was fabulous, in fact suncream was needed. This was a lovely change as the last 2 years when it’s been raining and was rather cold, so to have the sun shining was brilliant. I took loads of photos, so I’m now going to bore you with lots of them, I hope you don’t mind. Firstly I wandered round the hill on the left as you come in. There were some wonderful wooden carving by Siiren.co.uk in all shapes and sizes, from wooden spiders, chickens, scary faces to nesting boxes. But I think my personal favourite was this scary figure.

Please don’t have nightmares if you have this in your garden.

I then saw some more wood carving of horses, and some very intricate designs of elephants, as well as wooden rabbits and these fabulous ducks, with perfect little Hunter Wellingtons on….no purple ones like mine though. 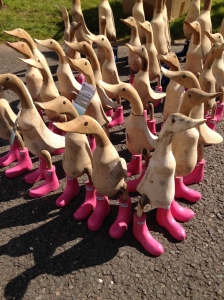 Ducks in their little pink Hunter Wellies. Mustn’t get their feet wet now.

I wandered round the marque next. I went this year with the intention of getting various plants for various places. But not specific plants, I’d just see what took my fancy. There were some amazing displays in the marque this year, congratulations to everyone who got a medal. There were several displays that went far beyond the usual displays and made you go “Wow!!” when you saw them. The first example of this was the Royal British Legion display. You could walk through it, and it was made up as a World War One trench. It was about 6 foot high and made of sandbags, with plants all over, it just looked amazing!! 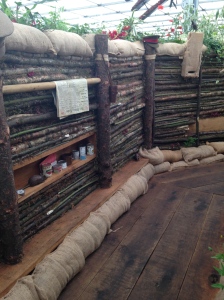 Having looked round the whole of the marque I then went back outside and looked at he rest of the gardens outside, before going into the main building to see what I could find in there. I found, what could only be described as palaces of bird houses by Mark’s Dovecotes, and the British Beekeepers Association (I didn’t hold a bee), but I did hold a chick.

It was so soft and fluffy I wanted to take it home, but didn’t know where to put it.

A rather scary top half of a zombie from Gardensite.co.uk which I thought would make a great display for Halloween, and a rather bizarre Fathers’ Day gift, which I’m sure some dad’s would like, but it did seem rather strange. 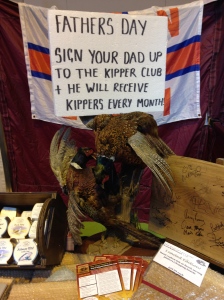 Not sure Mark would appreciate this for Fathers’ Day.

I then wandered round The Good Food Show which is next door and I bought some really tasty sausages, some cheeses, fudge, popcorn, chocolates, cakes and other bits and pieces. I left about 4.30pm having spent all I was going to (I’m not going to tell you how much I did spend that my little secret). But let’s just say I got everything I went for and more. Then it was time to drive up to St Helens to see my grandparents for a couple of days. It’s just under 100 miles away from the NEC, and should take about 1 hour 45 minutes. But the M6 being the M6 it took me longer and I finally reached my grand parents at 7pm. I was very exhausted and hungry, but very please to see them.