Posted on August 11, 2016 by clairesallotment

George has joined his sea scout troop down by the seaside for their summer camp. They all went down on Saturday, but we were still in Spain, so I took him down today and then he’ll come back with them this coming Saturday. He loves sea scouts as they get to do what kids love to do and go off on hikes, mess about in water, sail boats and generally have a great time. He’ll come back stinking, he always does! He’s been with them for 4 years now and has enjoyed every minute of it. So once Emily and I had dropped him off and then we both went on an adventure. We visited Hinton Ampner, which was on our route home. We’ve never visited this place before, and if you’re ever near, do go in and have a look. The gardens are to die for, especially the vegetable garden, and the house is lovely as well. We arrived at 1.30pm, and before we went exploring we both needed the loo. Then we found somewhere to sit down to have some lunch. Once we’d eaten enough we started to explore. The vegetable garden was the first thing, and it is set out so beautifully. All the produce was growing really well, and since returning from our holiday I’d not been able to get to my allotment, so I had a great longing to get back to playing in the soil. They had Sweet Peas growing over arches and they smelt so glorious.

The smell of the Sweet Peas as you walked under the arch was amazing.

They had loads of greenhouse where they were growing all sorts of delicate crops that need just that little bit more protection from Cucumbers, Grapes, Chillies and Sweet Peppers. You could only look in these from the door way as there was a rope to stop people going in. All the produce was amazing, and the Sweetcorn was over 6 foot tall with loads of cobs growing up them. I was amazed by the size of their Onions. Massive they were!! I must see if I can find the variety they were growing. They were called “Globo”. They seem to be easily available in the UK.

These onions were bigger than my hand!

All their produce was growing in perfect lines and in weed free soil. If only we all could keep our beds the same. I’m sure they have an army of workers keeping them looking that way. Where as we just have ourselves to do it all. 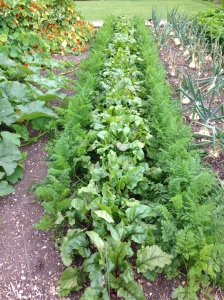 All in perfect line.

There is also a little church on the estate and it has 3 bells in the tower. The ropes were hanging down at the rear of the church, but being a good person I didn’t touch them. They are what we call “Unringable”. Which means that they’ve most probably not been maintained and are therefore unsafe to ring as normal church bells are rung. Maybe they’re chimed, but I don’t know. The church is tiny and very beautiful inside. There is also a cemetery round the back of the church and Emily and I went and had a look at some of the names on the grave stone. Emily found a wonderful name that she wants to use in one of her stories “Jane Eliza”. 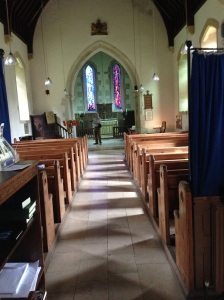 We then went to look around the house. Some of the rooms upstairs were closed, as during stormy weather in 2014 some of the roof got ripped off and water started leaking into the house. They’re nearly finished with their repair works, but some rooms are used as storage at the moment. Still with only a few rooms open upstairs it didn’t matter. The downstairs was glorious and they had a chandelier that was as tall as Emily!!  After we’d explored the house we went back out into the gardens and walked through the most perfectly manicured grass and beds that you’ve ever seen. The garden was so big that they have a “Temple” in the garden. Emily and I had a sit down in it for a while to have a look at the view.

The “Temple” in the gardens. The perfect place to sit and think.

Once we’d looked round everything we then went into the cafe and Emily had an ice cream and I had a cup of tea. We started to make our way home about 4.15pm. The place closed at 4.30pm We avoided all motorways coming home, but instead took the fast A roads. We had no traffic problems and arrived at our local Fish and Chip shop at a little before 5.30pm. It was a fish and chip supper as George was camping and we’d been out all day. The perfect end to a perfect day. I was exhausted having driven over 200 miles that day. Early bed for all.