Father’s are very important, and mustn’t be forgotten. Mark is a wonderful dad to our kiddly, widdlies. Never has he refused to change a stinky nappy (even the real humdingers!) He works so hard that I only have to work part time and can be available for the kids when they need me. So he deserves to be spoilt on Fathers’ Day. First thing in the morning they came in with a cup of tea for us both, and some pressies for Mark to open. Then for breakfast I toasted Warburton’s Crumpets. Mark really likes them and they are so soft and fluffy. Then we spent the day with his parents. We went to the Brooklands Museum. None of us have ever been before, but it’s something that we’d always wanted to go to. It’s not expensive to get in, and all the staff are really friendly. Basically it’s full of transport. Now I know that doesn’t sound that exciting, but honestly it really is. You don’t have to be a petrol head, of a plane spotter to enjoy it. We saw the most glorious vintage cars, which were being driven by their owners. Now I don’t know the makes of the cars, but they were a sight to behold. I like driving, and appreciate a beautiful car when I see one. They took part in the “Test Hill Challenge”, which some raced up in second gear, where as others struggled in first. I’m not sure even our car would make it in second gear. We saw the Chitty Chitty Bang Bang car. The actual one they used in the film! It’s really large, and quite a bizarre construction. Thankfully the “Child Snatcher” was no where to be seen (blimey he’s one creepy character). 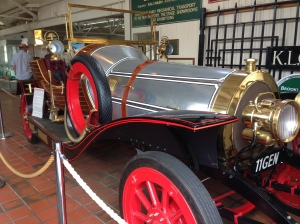 Also we saw the first bicycles. Some weird and wonderful designs, from “Penny Farthings”, so a rather strange contraption that had one large wheel on one side and then 2 small wheels on the other. All the bicycles had solid tyres and no shock absorbers!! A painful ride if ever I saw one. There was information on the land speed records. It really was interesting. Then we went outside and they were about to start up the “Napier Railton”. Now I had no idea what sort of car this was, but we were all warned that it makes one hell of a noise. They weren’t wrong. It took 3 men to push it to get it started, and then it fired into action. You had to shout to the person next to you. I’ve never heard anything like it before, it was more like a rocket than a car. 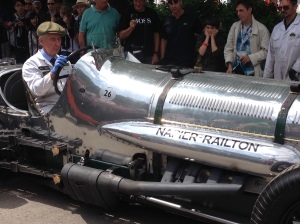 The noisiest car I’ve ever heard. But so sleek and beautiful.

We then went inside an air hanger and saw a Wellington Bomber that a man was lovingly restoring. On the floor below you saw all the rusted parts. I don’t know how long he’d been working on it for, but there was so much dedication in what he was doing. We then went on Concorde. I’ve only ever seen Concorde flying in the sky above our house, and it looks so tiny all the way up there. Apparently it flies at 60,000 ft (11 miles high) and at speeds of just over Mach 2!! I can’t even comprehend any of that. It’s such a wonderful aircraft, thin and sleek. Lots of leg room, I was very impressed. It’s such a shame that it came to such an abrupt and devastating end! 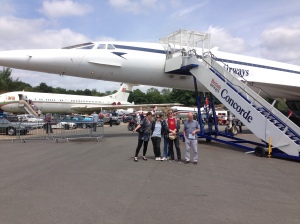 We then went and looked at one of the planes that the Sultan of Oman had. The front of the plane was where the Sultan was, and then further back the plane you got the less elegant the decor was. What did tickle us all was the fact that you had to be strapped into your bed. I guess when you’re asleep you don’t want to fall out of bed due to turbulence. Then at a little after 1.30pm a Spitfire did several flybys. Such a wonderful aeroplane, so sleek and manoeuvrable. We then went into the Bus Museum. Now I know this doesn’t sound that interesting, and George’s comment was “Do we have to?” However, he did say that this was actually his favourite part of the day. I was really interesting. We even found a bus that went where we live. We then had one last wander around outside and I saw a car with “Hotchkiss 96” written on the side. The driver told me that he’d driven it down the M40 to show it at Brooklands, and would then be driving it back later. Just imagine driving along the motorway, and you’re overtaken by this car. It’s like living in “Bizarro world”. 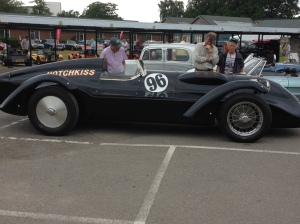 Wouldn’t you just love to drive this up the motorway.

We were all exhausted from all the walking we’d done, and went back to a pub near Mark’s parents and had a drink. Then we dropped Mark’s parents off at home, and then the 4 of us came home and I made roast chicken (not one of ours) and then had Lemon Meringue Cheesecake for pudding. I hope Mark had a lovely day.

Leave a Reply to lindas garden and wildlife Cancel reply