Storm Katie, you were a bit windy!

Posted on March 30, 2016 by clairesallotment

Now I watch the weather frequently, and it seemed that Katie suddenly appeared without warning on Sunday night and into Monday. I wasn’t expecting much wind, because usually they over estimate these winds and really they’re not that bad. But Katie must have been quite cross, or excited because she did lots of damage and displaced property. I was woken up during the night by the wind and rain, but being all snug and warm I went back to sleep. We woke up to find that the tarpaulin on the chicken run had been partially ripped off and couldn’t be re attached, so we removed that and put it in the bin. A few pots had been blown over and a few other minor problems, but nothing bad. Although the garden shed had lost a load of felt from it’s roof, which I replaced with new felt yesterday (Tuesday). When we looked at our local news, we discovered that trees had come down all over the place near where we live and people had lost their trampolines from their gardens, and others had found mystery trampolines in their gardens. I hope all the trampolines made it back to their rightful owners. Later that morning we had a family trip to London to the V & A Museum of Childhood in Bethnal Green. It was brilliant, looking at all the old toys, many I remember playing with when I was a child. I think the grown ups enjoyed looking round more than the kids did. They’ve got the Oliver Postgate exhibition on as well. It was amazing to see the Clangers, Ivor the Engine and Bagpuss and co, as well as lots of others. It’s all free to get in, which is also a bonus. Some of the toys on show were just down right horrible and there would have been know way that any child should have been given them, like this doll with a “Dunce” cap on.

Poor little doll. What nasty person would buy this for a child?

And others that were just weird like Magnetic hair to put on the Beatles? Yes you heard me correctly. And fun for all the family. It was wonderful to see how toys have changed that we now give to our children. When I was young there were still toys aimed specifically at boys or girls. The girls toys were all about having the perfect home, with tea sets, ironing boards, cookers and dust pans and brushes. Like that is what women are always supposed to do is to be a homemaker and that’s their lot in life. When I was little and playing with those toys, you assumed that that’s what you would be doing, so didn’t worry about it. It’s only looking back on it now you realise how sexist toys used to be. Take for example this from Holly Hobbie. I had the doll, but not the rest. Had they not heard of dishwashers?

“Happy is the Heart that loves Simple Things” Apparently that’s what women should do all day is the washing up.

Lots of toys aimed at telling you what the “Perfect Family” should be: Mum, Dad, Son and then Daughter. Oh how things have changed. What happens if like my parents you had 2 daughters? Oh, so 1970’s. But looking around I think I know now where my love of gardening began. Whether I actually had this or not I don’t know, but when I saw it, it looked very familiar, so I must have. I can see my self now, plodding round the garden in my red wellingtons and wearing my yellow swimming costume, in the garden checking on my seeds. I was a chubby little one, with really bright orange hair. You’ll have to take my word for it, because I’ll never show you THAT photo. 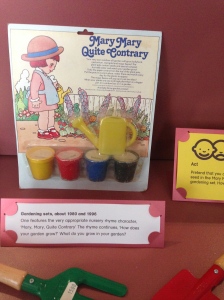 This could have been where my gardening adventure started. I don’t look like that down my allotment, just incase you’re wondering.

When we left the V & A, we then took the tube to St Paul’s Cathedral. Due to “Technical problems” the tube train didn’t stop at St Paul’s station and went straight on to Chancery Lane. So we had a bit more of a walk that we’d expected. As we were nearing St Paul’s my ears picked up the sound of bells ringing. It took a while for the others to hear then, but my “bell ringing senses were tingling”. The ringing was very good and they didn’t seem to have stopped for a while, so I asked the security guard standing by the door what they were doing. “Oh something that takes about 4 hours” he told me. “Oh that would be a peal I said. I’ll leave them to it,” I said. When I got home, I checked on a ringers website to see if they completed it, and they did. Stedman Cinques, and it took them 3hours and 57 minutes. Well done guys. If it was just a normal practice I would have loved to have gone up to have a ring.

One day I’ll get to ring here, but just not today. Mark and the kids in front of St Paul’s.

We then walked (or rather got blown) across the Wibbly Wobbly Bridge, or the Millennium Bridge as it is supposed to be know as. And headed for the Tate Modern to see what was on show in the Turbine Hall. There are loads of raised beds with soil from all over London. They’re seeing what is growing in the soil. It was amazing to see the difference in the soils. Some were the worst soil you could have ever thought of, and others looked like they’d be perfect for growing seedlings in. You couldn’t get too close, but from where we were standing most of them had weeds in them, mainly stinging nettles.

The urge to go and weed was immense.

Then it was time to go home. After a full day in very windy London we were all exhausted and ready for a sit down. Today (Wednesday) I went down the allotment to take some old chicken bedding to put in the compost heap and then to check on any storm damage. As I drove up to my plot, it was great to see the greenhouse was still in the same place, and even the wheel barrow and bench were still standing. The greenhouse glass however had not faired too well. I lost a couple of pane of glass in a previous storm, but this one really made it’s mark. I will have to get quite a few pane now. 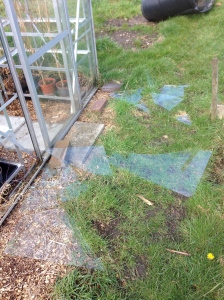 Broken glass from the side of the greenhouse where the door is.

But that’s not all. 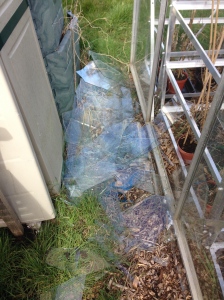 And the back of the greenhouse by the compost bins.

Looks like I’ll have to clear up more glass and take it to the tip this week.

6 Responses to Storm Katie, you were a bit windy!