Wednesday 17th June 2015 – That’s a quarter all perfect, only three quarters left to do!!

I continued today with sorting meticulously through each bed by weeding, cutting the grass, watering, manuring and feeding. It takes a while to do some beds, but once a bed is done you get a huge sense on achievement. I continued from where I’d stopped yesterday hoping to get to the end of the row today. Which I’m pleased to say I did. First it was a large bed that needed to be weeded and then a load of manure smothered on top. Last year my Potatoes and Broad beans were in there. I’m not sure what I’ll put in it this year, but most probably some brassicas as I’ve got some ready to go in. This took about and hour and a half to do and once I’d finished it was time to sit down for a spot of lunch.

I think I’ll put some brassica plants in this bed. Lots of manure to keep them happy.

After my soup, bread and currant bun I was raring to go again, so it was onto the next bed which contains my Horseradish and Globe Artichokes. This only needed weeding and then a thorough water and feed. I can’t believe that the Horseradish plant has been in for about 5 years now and was so small when I got it in it’s 3 inch pot. Now it’s massive!! The Artichokes are growing well, but seem to have got a few black fly, so I’ll have to sort those out tomorrow.

These just grow larger and larger every year.

Then finally it was time to sort out the bed where last year I grew the Sprouting Broccoli. It’s now finished, but did really well last year. It’s quite a small bed so I think my Sweetcorn will fit perfectly in it. The Sweetcorn is nearly large enough to go out, but I will either do it by the end of this week, but most probably next week. 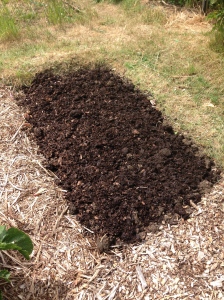 A perfect bed for my Sweetcorn.

But by about 1.30 I’d had enough so decided to come home for a little rest. Now I’d better go and water the garden. I’m even having to water the grass when I have spare water as it’s starting to turn brown because we’ve not had rain for ages.

4 Responses to Wednesday 17th June 2015 – That’s a quarter all perfect, only three quarters left to do!!