Posted on May 1, 2015 by clairesallotment

Now it’s nothing rude, just incase you were wondering. My blogs aren’t like that!! I spent just over 4 hours on my allotment today, which was so much fun. The wind has a bit of a nip in it, but the sun is warm, so it’s a rather strange combination. Jumper off or jumper on? I kept it on. I had a very productive day basically digging and turning over 3 more beds. Yes you heard me, I managed 3!! I was rather impressed with myself. I also chatted to some fellow plot holders, which is always a good thing. I had to walk to the allotment today because Mark had the car!! How dare he use his company car, doesn’t he realise how much I use it!? He was doing some audio recording in Gloucestershire so I’ll let him off…just this once. 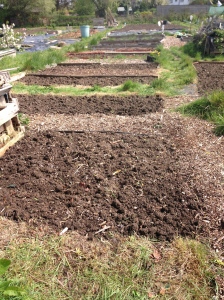 Yes I know the grass needs a trim, but I’ll get round to it….soon!

The weekend is going to be a bit iffy with the weather, and I’ve got various other things to do, so I’ll hopefully be able to catch up on all my seed sowing on Saturday and Sunday in amongst everything else that’s going on, but I’ll keep you informed of that as I do it. And the Monday is Star Wars Day (May 4th), and Mark and the kids are watching those films in what order I don’t know. So I’ll pop down the allotment instead. I’ll leave them with plenty of food, so they’ll be ok. What ever you’re doing this bank holiday weekend enjoy it, and behave yourself!!

This entry was posted in Uncategorized and tagged claire's allotment, Star Wars day. Bookmark the permalink.