Posted on April 19, 2015 by clairesallotment

Today was the day of out little tower outing to Somerset. One of our ringers Sue, moved down to Somerset about a year ago, and we’ve been meaning to find any excuse to go and see her. From May to October we’re usually very busy because we have loads of weddings to ring bells for, and once they’re over, then it’s Christmas. So April is the perfect time before it all starts again. We met in our church car park at 7am sharp. For a Saturday morning this was a bit of a stretch, but we all managed it. Once we’d all met, then off we started on our drive of just over 100 miles. This was a very pleasant journey down. I drove and had 4 other passengers. We had wonderful conversation as we went along, and I said in my best mummy voice “I don’t want to hear the phrase from anyone ‘Are we there yet?'”. They were all very good, and Brenda had bought along some sweeties for us all. We passed Stonehenge on our way, and admired the wonderful countryside (well they all admired the countryside, I kept my eyes on the road). Oh to live somewhere like that, so clean and lots of space to stretch your legs. We arrived just after 9am at our first tower St Giles, Leigh on Mendip. 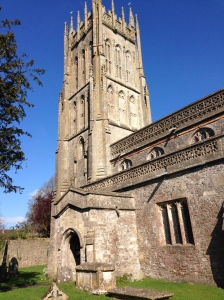 We were due to start at 10am, so we went for a gentle stroll up and down the lane, hoping to find a bakery to get a hot drink and maybe a snack, but we found nothing. The sun was shining, but the breeze was rather nippy. We had a look round the church, and just before 10am Julian came to open up for us. We were all needing a wee, so he very kindly asked the local pub if we could pop in. They very kindly offered to our relief. When we came out we met Sue. It was wonderful to see her again. The bells at St Giles, Leigh on Mendip are lovely, a little heavier than we are used to at 12 cwt (ours at home are 8.5 cwt), and don’t go as well as our bells at home, but we managed to ring some very good changes and methods. For one of our ringers Adele, this was her first outing, in fact it was the first time she’d ever rung anywhere else. 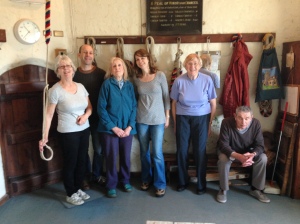 Our little band of ringers. I’m taking the photo…obviously!!

We rang until 11am before we all got back in our cars and off to our second tower. Our next port of call was All Saints, Nunney. When we arrived we noticed the glorious Nunney Castle. There it was right in the middle of the village and right by the church. We had a little while before we were due to start ringing, so we all went for a little stroll round it. It had a little moat and everything. They called it “A modest Castle”, whatever that means. I guess in Castle terms it means small, but it looked huge against the cottages in the village.

Nunney Castle, with moat and drawbridge. A bit draughty in places though.

When we’d finished looking at the castle we were met at All Saints, Nunney by Margaret G, who let us in the tower and rang with us for a while before she went downstairs to get us all a tea or coffee. The bells were again a little heavier than we’re used to, again at 12 cwt, but were very pleasant to ring. Again we had some wonderful ringing, nothing super complicated, but then I’d rather ring something simple and get it perfect rather than try something complicated and make a mess of it. The aim of the day was to have fun and try out new bells.

We finished ringing at 12.30pm and by this time we were all getting rather hungry, but we were booked in to the Fox and Hounds Pub in Tytherington, Frome. The food was what I’d call “Proper pub Food”. Very reasonably prices and very tasty. I had Scampi with chips and salad. There was loads of it and I didn’t think I’d eat it all, but I did. All that exercise in the morning makes you hungry. We didn’t have time for pudding which was a shame as lots of us were thinking about the Sticky Toffee Pudding. Maybe next time. 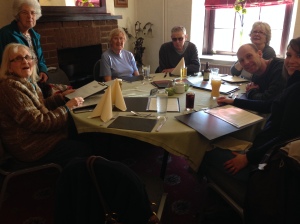 A well deserved lunch for us all.

Then it was onto our last tower of proper sized bells (you’ll understand in a bit). Our third stop was St Leonards in Marston Bigot. We ring here from 2.30pm-3.30pm. 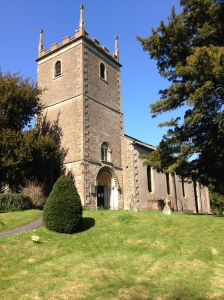 They have such wonderful village names in Somerset. These bells were 7 cwt, and absolutely glorious to ring. We all agreed that they were amazing (not as nice as our bells of course, but nearly). We got all 8 bells ringing, the other towers only had 6 bells each. And as they were lighter they were easier to ring for our more mature members of our band. Mavis being the oldest at 85! We were joined by Margaret C, the lady who was going to let us ring at our final tower, so that boosted our numbers and meant that we could give Stedman Doubles a go, (this will mean nothing to most people, but something to a few), which we did, and completed it very nicely. Our final destination was to a Mini Ring Pig-le-Tower. Now I’ve rung at a mini ring before, and so had a couple others, but for many, well they were Mini ring virgins. Let’s just say there is an art to ringing at a mini ring. The heaviest bell was 20lb 11oz!!

You don’t ring them like normal church bells, and they are a little tricky to master. Margaret C who owns Pig-le-Tower is rather eccentric in a very lovely way, and can talk the hind legs off a donkey. We were all rather tired by this point, and some of us could get it and for others it was a little tricky.

Yes that’s me and I’m a bell ringer. I can ring big bells to!

We all had a go, and some of us did better than others, but we all managed something, even if it was something very small. We managed to ring Bob Minimus (again this will mean nothing to most, but something to a few) with great success but mainly played about just trying to ring them.

You go Mavis and Brenda, show us how it’s done.

When we’d finished Margaret C very kindly offered us some refreshments before we drove home. We went back a slightly different way, to avoid Stonehenge as it would be very congested around 7pm. We arrived back at our church car park at just after 8pm all exhausted but very happy. I would like to say a HUGE, MASSIVE congratulations to everyone that came. I know for our mature ringers (Mavis, Brenda and John), it was a long day but you all did so marvellously. Fantastic ringing from Tim and Adele (first outing) who rang most, if not all of the time, as we were short on numbers. I really appreciate all you both did, I know that it was a lot. It was also wonderful to see Sue again after over a year, and even though she’d not rung for about a year, it was like she’d never been away. I hope that this has encouraged her to ring more now. Thank you to those who opened up their towers to us, Julian, Margaret G and Margaret C, we couldn’t have done it without you. I drove 232 miles that day, and was asleep by 10pm. I’m surprised I made it that far to be honest. Now to plan the next outing, but not quite so far away this time. Maybe the Andover area would be good.