Posted on April 11, 2015 by clairesallotment

The day started off with rain. This was a pleasant surprise as we’ve not had any for weeks now, which for us is rather odd. It didn’t last long, and by about 11am it was all gone and the sun came out. After mowing the grass and giving the back and front gardens a bit of a tidy (not much needed doing really) I then gave the chickens house and run a bit of a tidy. I took a box in with me to put any messy bits in, and straight away one of the chickens decided to jump on the side of it. Now there wasn’t anything in the box at the time, so the weight of the chicken on one side meant that the box flipped over and promptly landed upside down on top of the chicken. There she was, trapped in an up turned box. Stupid thing!! It all happened in slow motion and was very funny to see. However I think the chicken was a little confused by it all, and after I’d stopped laughing, and went and took the box off her so she could get out, she looked at me as if to say “What just happened?” She didn’t do it again, but another one jumped in the box and started scratching. I really don’t know what to say really about their mental state, I guess it runs in the family, we’re all a little strange. Then it was time to sow some Mushrooms. Now I’ve sown these before and they did really well. You can get a pack with everything you need to grow them in, and these can usually be found at a garden centre. But I was in town with my parents this week and we went into Poundland, and they had 2 different varieties, so I bought one of each and so did my parents. To be honest they have loads of gardening bits and pieces. I think the seeds and plants are great value for money. I may have to go and have another look again as I’ve got to do more to my fruit patch. 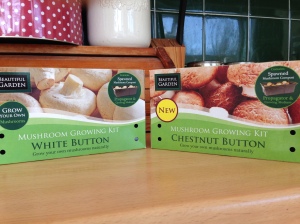 My 2 varieties of mushrooms from Poundland. Guess how much each box was?

I was tempted to ask how much they were, just to be silly, but I managed to resist!! I’m sure George would if I let him. The instructions are on the box and I’ll let you know how mine grow. Emily doesn’t like mushrooms, but the rest of us do. To be honest I never liked them when I was young, but love them now. In the box there is everything you need, and the instructions are very easy to follow.

This is what you get, and it’s all in the box for you.

Once you’ve emptied the compost on the spawn layer, you water it so it’s damp. Make sure you don’t over water it, otherwise it won’t work. And also don’t pat the compost down, just let it stay uneven. That way the mushrooms are able to grow through the gaps in the compost. Once you’ve done all this, then they need to go back in their box and then placed in a warm place. I’ve put mine on top of the kitchen cupboards as I think that’ll be a good place. But the cupboard under the stairs will work just as well. I’ve grown mine there before, but at the moment I’ve got lots of jam in the space where I’ve grown them before. Don’t let them dry out, and in 6 days you should see lots of little white strands growing.

All ready to grow.

I’ll keep you up updated on their progress, and hopefully in a couple of weeks I’ll have some mushrooms for dinner.