Posted on February 18, 2015 by clairesallotment

Both my 2 are on half term this week, and as it was such a gloriously sunny day we went out to Winkworth Arboretum. Now I know that we’ve been to this place quite a few times before, but we really enjoy it, and we always see something new. The kids wondered if we really needed our wellingtons, and knowing that they are both magnets towards mud and puddles I insisted. Lucky I did as you’ll find out a bit later. Now at this time of year Winkworth looks very bare, but there were plenty of Daffodils coming out and Snow drops. There were several trees that had blown down over the winter and some were made into wonderful carvings like this one, that they’d attached to a tree.

What a perfect little house.

As we walked round by the lake the geese came over to honk at us. We didn’t have any food for them, just our lunch and I wasn’t going to share my soup and salad with them. They were clearly very used to people as they had no fear what so ever. As we were walking along, I very sensibly stuck to the paths, but the kids walked near the stream (well of course they would). Now George is the one that always falls in the water or slips in the mud at some point. However, this time Emily decided to have a go instead. She was walking back to me when all of a sudden she dropped about a foot into the mud. It came up to the very top of her wellingtons. I’m afraid I burst into laughter (not very helpful I know). She stood there rather miffed and said in a stern tone, “Well is anyone going to help me?”, by which I remarked, “George is closer.” Good on George he helped her the best he could. You may be wondering what that blue thing on his left arm is, well it’s a plaster cast! Yes he’s done it again, but playing Dodgeball at school this time. But this time he’s fractured the scaphoid bone in his wrist. The plaster has to stay on for 6 weeks, but unlike when he broke his ankle (he’s done that twice) he can walk with a plastered wrist. He’s right handed so that also helps. Emily had very muddy knees when he finally got back up, and a little while later saw the funny side of what had happened. 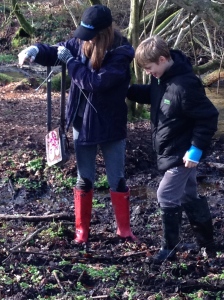 “Emily’s turn to fall in the mud…it’s usually George.

We sat down on a fallen tree and had our lunch and looked at the view, it was very peaceful and quiet. Then after exploring a little bit more we went to the cafe and I had a cup of tea and the kids had an ice cream. It doesn’t matter how cold it is they always want an ice cream. But I don’t mind buying them one as I’ve not paid anything to get in as we’re members.

Then it was back home to let the chicken out in their big run. They laid another egg today, they’re doing really well and seem very happy. Their feathers are growing well and they’re not as frightened of all the noises that they hear. They’re still very silly though, but then they’re mine, so what would you expect!!