Posted on January 8, 2015 by clairesallotment

Out of all the parks, Disney Hollywood Studios was the most bizarrely set out. It was very good, don’t get me wrong, but just didn’t seemed to be as organised as the other parks. Still we had a great day. We got the boat from Epcot, which took about 20-30 minutes, and took you past all the hotels on the Disney complex. I know that they’re more expensive, but you’re right in the centre of the parks and the transport to and from each park is very frequent. The hotel that we stayed in had 3 buses in the morning and then 3 in the evening, where as if you wanted to go to Universal there was 1 in the morning at 7.45am and then 1 back at 6.30. If you wanted to stay to watch the fireworks, then you would have to get a cab back to your hotel which would have cost $40. If we go again, we’ll stay in one of the the parks hotels. We arrived ready for another busy day. 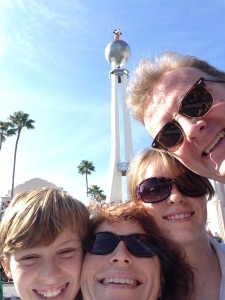 The first show we saw was Indiana Jones Epic Stunt Spectacular. It was like watching a movie being shot. Having seen movies being shot several times (I’ve been an extra in several films, including Robot Overlords), it was great to see big explosions, and all the well known stunts that you expect. The show lasted for about 40 minutes, and was very well done. Mark and the kids then went on the Star Tours ride. Again this was not suitable for me, so I went shopping and found some very interesting Muppets mugs. I’ve been a fan of the Muppets since I first saw them when I was very little, so I was very happy and bought myself a new mug.

It’s time to play the music, it’s time to light the lights, it time to make some tea on the Muppet show tonight!

While they were enjoying their scary ride, I also enjoyed trying on various winter hats. I will do an entire blog about all the hats I found. Like George having to take a sip at all the water fountains in the parks, I had to try on all the hats. We all have to have our  strange thing. Oh and talking about strange things, can anyone shine a light on the turkey leg phenomenon? They had them at all the parks, and people were eating them all day long. I know it’s Christmas, but I can’t help thinking about all those turkey’s hobbling round on crutches. Anyway, we then all met up and went to see a car chase show called “Lights, Motors, Action!”. Again it was like the Indiana Jones show, as it was like watching a movie being filmed. Some excellent driving, and to be honest a bit like the Sunday driving around where we live. 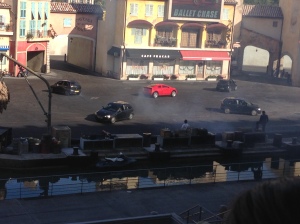 We then saw the Muppet Vision 3D, which was brilliant, The Great Movie Ride, George met the green soldier from Toy Story, and both Emily and George had their photo taken with Phineas and Ferb. 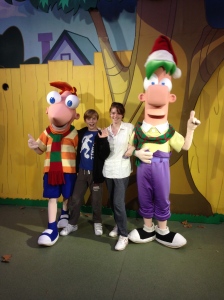 Oh, and we finally found some green apples for George. He loves Granny Smith apples, and has been 8 days without one. We found 3 and bought them all. As he ate his first one he was like a baby who’s just had a full bottle, very satisfied. Oh and he ate the other 2 apples a bit later on in the day. When we’d done all we wanted to, we got the boat back to Epcot and got Fish and Chips from the English area in the World Showcase, and sat by the lake to eat it. Before we caught the bus back to our hotel, we heard a band playing, so we went to investigate. They played some well know Rock and Roll numbers, and loads of people were dancing away. George went for a wander and came back saying Pooh and Tigger were about. So we went to see, and the kids and I had our photo taken with them both.

You never get too old to have your photo taken with these two.