It’s only 4 weeks away until I to my Shine Walk, which is rather scary to be honest. I’ve had a bit of a break from walking whilst I was on holiday. I did walk a bit though, to mum and dads nearest town, which is 4 miles away. This isn’t far, but when you’re doing it in 30 degrees and there are hardly any paths, and peoples dogs keep barking at you, it can be quite testing. It took me 57 minutes to walk to the town, where I then met up with the rest of the family and we did some shopping before they all drove back, but I walked. It was harder on the way back, as it was hotter, and up hill. However I got back in one piece, and changed straight into my swim wear and went in the pool to cool down. I also walked to my aunties who lives in the next town, and that’s a little further away, just under 5 miles, and it took me 1hour and 10 minutes. I had to dodge a dead cat on the side of the road which wasn’t very nice, and the Spanish drivers, most of which gave me more room that I needed. I walked past the Guarda Civil (police), and they gave me a rather strange look, as not many people walk around there. I didn’t walk back as the temperature was 38 degrees, and that would have been suicidal!! So today I was back to my long walks. I decided that walking to Ham House and Gardens would be the most sensible thing to do as I could have a sit down in the gardens before I walked home. It’s just over 9 miles from ringing to Ham House, and then just under 9 miles back home. I’m a little stiff today in the tops of my legs, but that’ll not stop me doing anything and will probably go by tomorrow. I forgot how much I enjoyed my little walk. On the way home, I walked for several miles, right next to the River Thames, and looked at all the boats either moored or leisurely sailing past. I came across this canal boat that was absolutely amazing, so had to take a picture to show you, I think it’s the best garden I’ve ever seen. I’ll have to describe it to you as my phone has gone to the great Apple Store graveyard in the Sky. The roof was grass, and the decking of the boat was grass in places, and a multitude of containers with various plants growing in them. It was like a miniature floating garden. 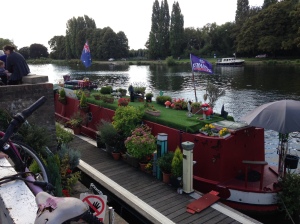 What a magnificent creation. Congratulation whoever did this.

I arrived home just after 3pm, and after I’d showered, I sat down with a cup of tea and watched the latest Great British Bake Off. I love this programme, always have done. But I found myself shouting at the TV when Iain Watter throw his Baked Alaska in the bin. I felt so sorry for him, he was such a wonderful baker, and don’t you just love his beard. I guess I would have done the same thing, if someone had ruined my garden by chopping something down that was mine without even asking me first (Mark knows what I mean…it wasn’t him though). I’ve planned where I’m going to walk on my last few weeks of training, but I’ll keep you updated on those when I do them.