A huge massive “Thank you!!” to my sister Michelle for looking after my garden and allotment while I was away. Not that she had to do much watering, as apparently we had loads of rain (it was lovely and sunny in Spain). But she lives about 7 miles away, so even if all she needs to water is the greenhouse, she goes out of her way to come to mine. We arrived back from holiday on the Wednesday evening, so first thing on Thursday I went down to see how everything was getting on. I came back with an impressive haul: 2 Cabbages, loads of Potatoes, some Onions, Carrots, a whole bag full of French beans, some Tomatoes, 4 lovely heads of Corn and some Rhubarb. Now it’s the difficult decision of what to have with dinner tonight and the rest I’ll either store away or freeze. I think the Corn looks rather tasty, so that’s a definite. I’ll go any buy my sister a bottle of Sherry, as I know she really likes it. She’s a star, and I appreciate all she does. I did take a picture of my harvest, but my phone has just decided to die (systems failure apparently, which is rather bad), so I can’t show you a photo, so you’ll just have to take my word for it.

I’ve now got a new phone, so here’s a photo for you to see. 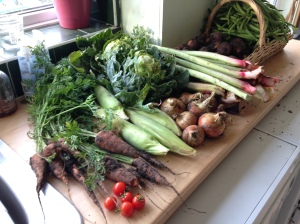 A rather impressive haul when I returned from holiday.