Our trip to Scotney Castle, Kent.

Posted on August 5, 2014 by clairesallotment

Today the kids and I went to Scotney Castle near Tunbridge Wells, Kent. It’s a really beautiful fairy tale place, and has only been opened to the public for the last 6 or 7 years. It’s National Trust, so we don’t have to pay to get in. Great news as it would have cost us just under £30 for us to get in, and then £3 for parking. Worth every penny if you do have to pay, but a massive bonus if you don’t. So armed with our map we went a wandering. Firstly to the Old Castle and Moat that was built in the 1300’s. It’s such a rickety old building, with lots of cupboards that the kids said were great to put “Naughty children in!!” I know some children I’d like to put in the naughty cupboard and then leave there for a long time. George found the loos, well he would wouldn’t he. Not like ours of course, just some holes over the moat. I can’t imagine what those smelt like!! The after we’d looked around we sat on a bench just outside the Castle and ate our picnic lunch. Then we went wandering round the grounds. 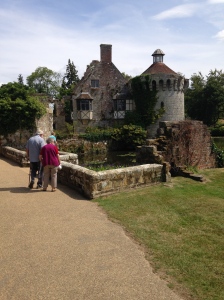 The Old Castle and Moat.

We found a little boat house, that to be honest looked like something the 7 dwarfs would have lived in. We then came across a rather bizarre Henry Moore sculpture, which we weren’t sure what it was supposed to be, but it looked rather interesting. An amazing quarry garden that I could have lived in it was so beautiful. There were steps going here and there and plants growing out of every crevasse in the rocks.

The perfect quarry garden. I could have got very lost in there if it wasn’t for our map.

The views of the surrounding grounds were beautiful. George found the perfect old Oak tree to make a tree house in. The tree was 250-300 years old, and the branches were so gnarled it looked like it would come to life during a full moon. And finally before we left we went into the walled garden. It was so beautiful, the perfect vegetable plot. All sorts of fruit and vegetable were growing from Rhubarb, Chillies, Jerusalem Artichokes, Kale and Carrots. All in perfect rows with raised beds with herbs in. I was in heaven. Instead of using little plastic labels to show were everything was planted they used plates!! Ingenious!! I may pinch that idea, very easy to see and you can write in large letters.

Now where can I get some cheap white plates? I know Ikea!!

Then it was a quick trip to the shop. As the kids had been so good I bought them some jelly beans, and as Mark had to work so couldn’t come with us I got him some Rocky Road chocolate slab. I can’t have him missing out on all the fun, he would sulk. George was very quiet on the way home in the back seat. When I asked Emily why that was, well you can see for yourself…..

Even when they’re 12, they still fall asleep in the car.

5 Responses to Our trip to Scotney Castle, Kent.