As we were due another glorious day, but with more of a breeze today. I decided the best thing to do was to spend as much time up the allotment as I could. I’ve now practically finished plot 2, as all the beds are dug over and filled, apart from the French Beans. These will be going in in the next couple of weeks. 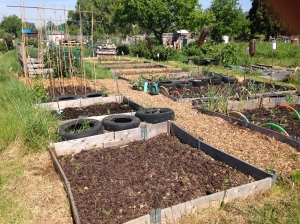 So it was time to start spending more time on plot one. I’ve not taken a picture of that one to show you, as I’m a bit embarrassed by it at the moment. Half of it is ok, but the other half needs some major tidying. I’ll take a picture when it’s all finished. So I started on the bed with the Rhubarb in. I managed to get most of the bed sorted, and manured it. So I’m now taking up last years Sprouting Broccoli which has finished. I’ve got lots of Butternut Squash that need a home, so I think that’s where I’ll put them when it’s all cleared. I spent just under 4 hours digging today, and am now rather tired. I took my lunch with me, and 2 bottles of water. But I drunk all the water and ate all my lunch, so I then had to come home for a well earned cup of tea. I also planted in my “All Year Round Blend” of Cabbage, and watered various seeds that have started to grow. So it’s all go up my allotment now, which is brilliant. We are due some rain tomorrow, but it’ll be rather hit and miss. Hopefully I’ll be able to carry on what I’ve started, so in the words of Freddie Mercury “Don’t stop me now, I’m having such a good time, I’m having a ball!”