Posted on July 5, 2016 by clairesallotment

With Emily not at school, because she’s finished her exams, and George having an INSET day today, AND the weather being dry (yes I know shock horror). I decided that the kids and I would go on an adventure. We left home just after 10am all packed and ready with a blanket, picnic lunch, a change of clothes, some suncream, 3 chairs, as well as lots of other things.

All packed up and ready to go on our adventure.

You’re desperate to know where we were heading off to aren’t you? Well this is where we went. We drove to Petworth House and Park and arrived about a little after 11.15am. A very pleasant drive and no problems with the traffic. We’ve been here before, but not for a while. As we’re National Trust Members, it didn’t cost us anthing to get in, and we’d only stopped to break up our journey, stretch our legs, use the loo and have a snack to eat from our picnic, as well as have a little wander around. The sun was shining which was a bonus, but the clouds were gathering. The weather report in the morning had said that there would be the outside chance of a shower where we were going. But we were confident it wouldn’t rain, so refused to pack any sort of waterproof or umbrella. Jumpers on the other hand we were taking. When we arrived at Petworth we had a little snack, and then went to the house. We’d just missed a house tour, so decided to go and look round the kitchens instead. Very interesting and the experts in each room were very helpful. Being a school day there weren’t many people about, and we did get a few weird looks from people who may have thought that I’d taken my children out of school to come and visit. George got into the spirit of being a cook back in the 1920’s. He’ll find any excuse to dress up. I’m not going to stop him from having fun. There are so few kids his age (let alone parents who will let their kids)  having fun like my 2 do. It’s something he’s never grown out of, and to be honest I hope he never does grow out of it. He makes us laugh so much by his little expressions and his willingness to take part in anything. 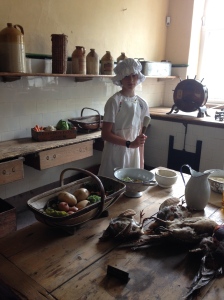 What are you cooking for us today chef George?

We went into the preserving room, and myself and the expert lady in the room had a long in depth discussion about making Strawberry jam. I’m not sure how long we were talking for, but the kids went for a wander. When I went looking for them, I couldn’t find them, and finally found Emily, but neither of us knew where George had gone to. Emily popped outside, but still we couldn’t find him. Where had he got to? He didn’t have his phone with his, so I couldn’t call him. So Emily and I stayed together and walked into each room again to see if we could find him. Finally there he was! He’d been playing with sand and making his own land creation. I said to him, “What are you doing?”, his reply was “I’m playing God!” It kept him amused for ages. I don’t think I’ve ever seen him concentrate on anything for so long.

“I make mountain and then crush it with my hand!”

By this time it was getting on for 1pm, so we got back in the car and drove to our final destination which was…..West Wittering Beach!! Yes you heard me correctly. In the June half term we usually go to the beach, but the weather was so atrocious that we didn’t go, plus Emily was revising. So today was the first time this year that we went to the seaside. The car parking is brilliant. One fixed price and you never park too far away from the sea. The tide was going out and the lovely sandy beach was revealing itself. Now it was rather breezy on the beach, it usually is, so we set up camp behind a sand dune. We got settled in our little space and had our lunch. Now I don’t know about you, but when you go for a day out the kids eat so much!! I always take loads of food, but never expect them to get through most of it. I’ve got 2 teenage children and they eat so much!

We’re British and we’ll sit on the beach what ever the weather.

After lunch George played football, but also took with him a tennis ball, so George and I then played catch. I’ve not done that for so long, and have never been a very good catcher. But today I was on a role. I even caught with one hand!! Yes I know, I hope you’re impressed. George catches with one hand all the time. How he does that I don’t know. And he can throw the ball so far. He doesn’t have a dominant hand for throwing or catching, and changes over when one gets tired. He writes right handed, but all the other stuff he does left handed. Mark is the other way round (writes left handed and everything else right handed). Emily and I are right handed through and through. So I have 2 weirdos in my household, and it’s not the girls! At about 4pm he’d had enough of being blown about, so decided to put everything back in the car, go for a paddle and then have an ice cream. I told the kids it was “non negotiable”. Blimey the sea was cold, but we’re British and we paddle what ever the weather. 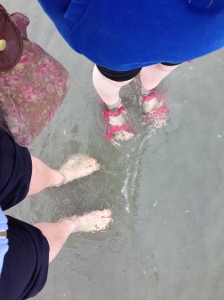 We’re paddling in the sea, and it’s bloody cold!

George on the other hand had to always go one step further.

He kept his shorts dry amazingly.

We had a lovely gently stroll along the beach, and it was wonderful. The only thing missing was Mark as he was stuck in the office at work. We did buy his a special treat of cookies and fudge from Petworth. After our walk we went to the cafe, and the kids had an ice cream, but me being slightly more sensible had a coffee. Decaf of course because caffeine makes me go like a meerkat, and that won’t be good driving home. Knowing that we had about a 2 hour drive home, we all made sure we’d been to the loo before we got back in the car, and then we towelled off as much of the sand as we could, but it gets everywhere. The drive home was very uneventful, until we got about 3 miles away from home, when we got stuck, but hey ho. We arrived home finally, all very exhausted and tired. We all showered before he had dinner to remove any residual sand from places I never even knew sand could get into. A great day was had by all.