Posted on January 4, 2016 by clairesallotment

This is our family motto “We’re not lost, we’re exploring!” It’s been our family motto for nearly 2 decades now, since we went on holiday, I think it was Moraira, Spain. We were staying in a friends villa in a road, half way up a hill, and whenever we went out driving, we kept getting lost. We must have driven down every road in the area at some point. So ever since that day we’ve had this phrase as our family motto. We use this when we go out for wanders and aren’t 100% sure where we actually are. When the kids go walking with me, that’s usually what happens. I’ve got the world worst sense of direction. To give you a little example, I was in our towns shopping centre just before Christmas, and went in a shop that I very rarely go in, and when I came out, I had to stand for a couple of seconds to try and figure out which way I needed to go. All I can say is thank goodness for Google Maps and a Sat Nav!! So this morning the sun was shining and the sky was blue (it persistently poured yesterday) and today was the last day before the kids go back to school (George is Tuesday and Emily is Wednesday), so we went exploring. We drove to Bookham Common, Surrey, which we’ve never been to before. It’s run by the National Trust, so if you’re a member you don’t have to pay, if you’re not then it costs £4 to park. We took a map and decided to follow the “Purple arrow route”.

So we all put on our wellingtons and off we went! The kids were excited about going, although George looks far from excited in the photo. Still he managed to find a stick straight away so he was happy. The first part of the walk was very uneventful and dry. This was very surprising considering all the rain that we’d had the previous day. We saw a sign that pointed to a “Bird Hide” so we went to investigate. Once we found it we had a sit down and had a look through the little peep holes. The hide was situated looking out over the “Upper Eastern Pond”, and we saw a wonderful array of water birds and some mute swans in the distance. I think it’ll be brilliant to return in the June half term to see all the baby ducks learning how to swim about. We then resumed on our purple arrow route. It was at this point that the lovely dry path stopped, and a muddy quagmire started. If you kept your foot in the mud for too long then it was fairly difficult to get it out. Every time we took a step, our wellingtons made farting noises, although some of those may have been George’s bottom. I am glad to report that no one fell over, I’m especially pleased I didn’t! 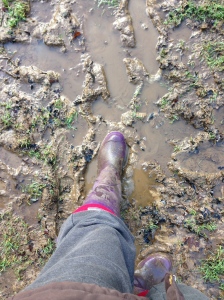 Just a bit on the muddy side!

We finally got back to a decent track and it was at this point that we realised that we had no idea where about’s on the map we actually were. Had we gone too far, or not far enough? The purple arrows had disappeared and we were walking blind as it were. Now George is a Scout, and Emily or I have never been a Brownie or a Girl Guide, but even I know that there’s a compass on my phone and if I used that and line it up with the compass on the map we’ll be heading in the right direction to get back to the car. George didn’t even know he had a compass on his phone!! We went past a large pond that wasn’t even on the map (maybe it was just a very large puddle) and across a bridge, which again wasn’t on the map. We were just walking through woods. They’re named on the map, but not as you walk along, so you have know idea which one you’re going past. They all look the same with trees and brambles. George found a large puddle that, well obviously he had to go and stand in, it’s George and it’s what he does. It was deep, but not deep enough for the water to go over the tops of his wellingtons. Still it cleaned his boots. 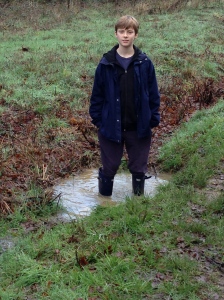 A boy is never happier than when he’s standing in a puddle.

We then came across a “Play Area”, again this was not on the map. Had we transported ourselves to some other place I wonder. What is the point of putting a huge wooden play area in and not putting it on the map? The kids had a play on the cut down trees and climbing logs. But then we had a brief shower which wasn’t a problem, but we weren’t sure how far we were from the car. Then suddenly to our great relief we saw some purple arrows!! Yay we were saved!! But the question was were we going in the right direction? Let’s hope so. You’ll be pleased to hear that yes we were, and very soon we managed to find the car park and our car was waiting very patiently for us. We gave our wellingtons a brief wash off in a puddle and changed into some clean footwear before we drove home. We’d been “exploring” for about 2 hours. A well deserved lunch was in order when we got home.