Monday 23rd November 2015 – You’ll never see parsnips like THAT in the shops.

Posted on November 23, 2015 by clairesallotment

I was very pleased to be able to return to my allotment again today. I’ve been working for the last 3 weeks so have been unable to go. It’s surprising how much you miss it. Now that work has practically finished for this term, I’m able to return to continue where I left off. So I wrapped up very warm with layers, a woolly hat, scarf and gloves on and off I went. There was still frost on the ground when I left, but that soon went. It was only about 3 degrees and wasn’t going to raise much more today, but the sun was shining so that was a massive bonus. I’ve now harvested all my Pop Corn, so will strip all the outer leaves off and then store the cobs in a frost free place and away from where any mice can get them, for about a month or so. This will dry them out before I flick off all the corn and store it in the house. They’ve done fairly well this year, so that’s good. Much better than the normal Sweet corn, which to be honest was very pants!! I then moved onto harvesting the Celeriac. Now this went in very, very late this year, so I wasn’t expecting great things for it. And I didn’t get great things from it. I ended up with about 5 reasonable sized ones. Never mind you can’t win them all. Then it was on to the Parsnips. These I sowed in March I think, just as it was getting warmer. The germination rate varies year on year, but it’s not how many germinate, it what size they grow to. Now if this is anything to go on, then I’m very happy. The first one I pulled up was what I would call, proper sized, I had a couple of small ones, and then some huge ones. 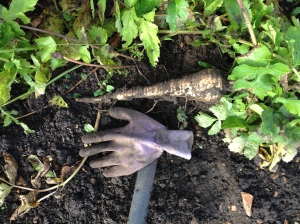 The first Parsnip of the year. And the only normal shaped one!

One that looked like an alien, and one that decided to be a bugger to dig up. The reason being, it had decided to do the splits. But all in all a very good harvest. One had Canker, but I’m not worried about that one. I’ll clean them off and then cut them into shapes ready for roasting and then freeze them. Then when I need some I’ll just take them out of the freezer and roast them. After a couple of hours I came home because I was getting hungry and my toes were getting cold. I was wearing 2 pairs of socks, but clearly for my delicate little toes that’s not enough. I’ve got a couple of pieces of glass to replace in the greenhouse on my allotment due to storm Barney last week. I am please to report that the greenhouse stayed put, and just 2 panes blew out. I think with it being so exposed that would pretty good going.

4 Responses to Monday 23rd November 2015 – You’ll never see parsnips like THAT in the shops.