Posted on September 11, 2015 by clairesallotment

Another beautiful day on the allotment. I was “playing” for nearly 4 hours today which was great fun. When you are doing something that you really enjoy, it’s not work, it’s more like playing. I continued from where I left off yesterday and managed to get to the very end of the row of beds. I made a couple of trips to the “Green Waste Area”. This is an area on our site where we’re allowed to put our green compostable waste, like weeds and brambles etc. The Council then remove it each year for free and we then start all over again. It’s now much more organised than it used to be several years ago, but then the allotment sites in our borough are more organised than they were when I first became an allotment holder 10 years ago!! Oh my has it been that long? The Sprouting Broccoli plants are growing very well, but won’t be ready to harvest until early next year. I’ve still got them covered up with netting because if I didn’t, then the birds would have a feast. In the area next to the Broccoli I had one Pumpkin plant growing, but there was only a teeny tiny fruit growing, so I pulled it up because it wouldn’t have grown. This meant that I could then turn the earth over and aerate it before winter. 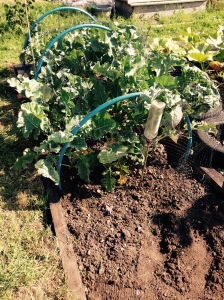 My Sprouting Broccoli is growing well. Keep netted otherwise the birds will get it.

I then moved onto the next bed which has the Brussels Sprouts growing in. Again make sure that you keep these covered, for the same reason. They’ve still got a lot of growing to do, but hopefully I’ll start picking some by December and then all the way through to February. I’ll show you how I cook them when I come to it. It’s very special and there’s not a soggy sprout in sight. 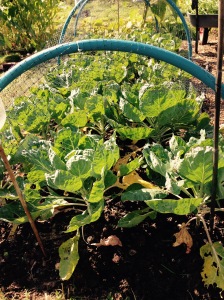 My Brussels Sprouts are growing away nicely. I’m sure we’ll be windy after we’ve eaten these.

Then after lunch I moved onto the bed where I have Black Radish, Spring Onions, Spinach are growing. I weeded in between these which was rather tricky, then watered them. Also in this bed I had Chop Suey Greens growing. The remainder had gone to seed so couldn’t be eaten, so I removed these and turned over the soil and weeded it. Well that was a good days work, just a small bed and a rather large one to sort out on plot 2 and then I’ll move onto plot 1!!