Today the kids and I went to another National Trust place, well when you’re a member you don’t want to waste your membership do you, that’s just silly. We ticked another place off our list today and visited Hatchlands Park in West Horsley. A very pleasant drive and not that far away from where we live. We left home at just after 10.30am and arrived around 11.15am. There are 3 different walks that you can take round the estate, red which is 1.4km, blue which is 2km or the yellow which is 4km. We opted for the yellow and so off we went. First of all we came into a field that had lots of black and brown cows in. Now cows are rather stupid, and when I was young I helped get some in for milking and they panic at the slightest thing. Even though people are walking through their field all day long, they don’t like you getting too close and back away if you do. We left them to eat their grass and moo to themselves. We then came to a large pond called “Sheepwash Pond”. Not sure if it would really be a good idea to wash sheep in it, but the ducks seemed to be having fun. There were some wonderful willow trees around the edges of the pond, and the kids enjoyed climbing on them. I’m pleased to say that none of us fell in the water….even George which is a miracle!! We then continued on the yellow trail when Emily found a very unfortunate beetle. How long he’d been in this predicament we have no idea, but he wasn’t moving and was long gone. I know it sounds horrible, but we looked at it for ages in amazement. 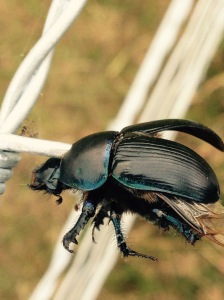 Poor little bugger. Managed to fly straight into some barbed wire and impale himself right in his neck.

It was at this point that we got lost. We had a map, but instead of continuing straight ahead, we turned right, and didn’t know where we were. But we soon found out and realised that we’d missed the entire top section off. Never mind. Next we came across the “Great Wix Wood” and inside the wood was the “Wizard Wix’s Willow Warren”. You try saying that several times fast, George tried and it went very wrong. Inside the warren it was very dark and spooky. Emily (know loves horror movies) kept telling us that people got murdered in places like this!! What a charming daughter I have. Fortunately we all made it out alive, but the kids had fun playing in the various hidey holes and structures.

You’re never too old to play in a make shift shelter.

After this it was time for lunch, and we found a lovely little picnic area. We’d bought our own lunch of sandwiches, crisps, cake, fruit, little cheeses and drink. After all our walking we were all very hungry. Once we’d eaten we then rejoined the yellow trail and walked through the Little Wix Wood, where we saw lots of fairy doors. We then continued on our walk, following the yellow trail and found the “Sylvanian Families Nature Trail”, where there were lots of little questions about nature (we managed to get them all right) and several carvings of Sylvanian Family members made from tree stumps. 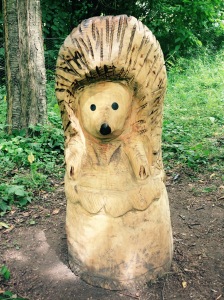 There were 3 carvings of various characters. I don’t think we missed any.

Then it was the final part of the yellow route towards the house. We saw the “Ice House” and then it was onto “The Temple”. Then we all got to have a play on some space hoppers. George didn’t need any encouragement to have a go. Oh my goodness that boy can bounce high on one!! He must have bounced about 18 inches!! Out of all the children bouncing on them my 2 were the eldest, but who cares, they were put there to be bounced on my anyone of any age.

If you look carefully you can see the shadow of his space hopper!!

Emily needed a little more encouragement, but soon got the hang of it. Even though she didn’t bounce as high as George did, she still had loads of fun. 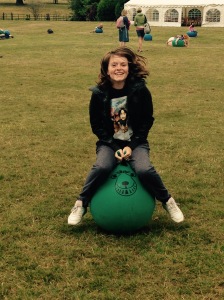 You can see the little girl in her still trying to get out.

Then it was my turn. I’ve not been on a space hopper for….well I have no idea. As I was about to get on I looked around to make sure no one was watching and saw an elderly lady in a wheel chair was smiling at me. I had a bounce, but that picture has already been blogged so I won’t embarrass myself again by putting it up once more. Then it was time to look round the house. They have over 40 pianos on the ground floor alone! You can only play one at a time. All were beautiful and belonged to various composers and important people. After looking in the house we went to the courtyard and looked in the Old Stable, and there was a little secret garden that I found. So had a few other people, so I didn’t stay long and left them in peace. Finally it was a trip to the cafe for an ice cream for the kids and a tea for me. Lovely so see that they give you a decent sized cup (more a mug size really) which was brilliant.

We then drove home and returned around 3pm. A lovely day, thank you Hatchlands Park, we’ll come again.