The weather was very “eh!” today, so not suitable for going to the allotment. It kept on raining, and I don’t really like getting THAT wet! So after lots of errands that I had to run this morning (all boring stuff that I’m not going to bore you with), this afternoon was free to dodge the showers and do stuff in the greenhouse. I started with making up 2 more of my staging packs. Now after making the first one, which did take a little while, the subsequent ones were much easer. After these were done, it was time to sort out some of the plants in the greenhouse, and pot them all on into various sized pots. So let me start at the beginning (which is always a good place to start). I potted up 2 Aubergine plants into 6 inch pots. These will stay in these for the rest of their growing life. Soon I’ll attached canes and they can grow up those. Hopefully I’ll get some fruit from these, they’re always a little awkward in the UK weather, but you never know. I then potted on 2 Sweet Peppers, again into 6 inch pots. I’ve only got 2 plants this year out of all the seeds I sowed. I usually do get some peppers, but they tend to be fairly small. But only time will tell. I then potted on 2 Spanish Cucumbers, again into 6 inch pots. If you grow these in a climate similar to Spain, then they can grow outside, but here in the UK they’ll have to stay in the greenhouse. The skins are thicker than our English Cucumbers, so I’ll have to take the skins off before we eat them. Then it was on to the Cucamelons which are in 3 inch pots. I saved one plant from last year. You can do this, as long as you store them in a frost free place. But I also sowed some new seeds, just in case. I now have 7 plants, so hopefully that’ll be enough Cucamelons to last us for a while anyway. When they get bigger they’ll go into 6 inch pots, but I’ll let you know when I do that.Hopefully it’ll be in about 3 weeks time. I then potted up the last of the Basil seedlings. These have been a bit slow to grow. I’m not sure why, but there you go. I didn’t expect them to be this tricky, but there’s obviously something they’re not happy about. I now how 5 plants in total. Hopefully now they’re in their new home they’ll grow well. Then it was the time to pot up the one and only Italian White Sunflower. All the others I potted up into 3 inch pots about 3-4 weeks ago, but the Italian White has been very slow. Still it’s now in a pot all on it’s own, and hopefully it’ll catch up with the others very soon. Then it was time to sort out the Celeriac. I did sow this a little later than I normally do this year, but it seems to have done very well. I picked out 36 plants for myself and put them in 3 inch pots, and then potted up 10 for my sister. The Celeriac did really well in the allotment last year, so hopefully it’ll do well again this year. I then potted up my Chop Suey Greens. Make sure that if you sow these, you don’t sow then too early. They can’t go out until all frost is gone in your area, so sow them about a month before your last frost date, otherwise they’ll get a flower on them before you plant them out and then they’ve gone too far. I potted up into 3 inch pots, 9 pots for me, with 2 plants in each pot and then a couple of plants for my sister. And finally (yes it’s the last one) I potted up some more Sprouting Broccoli. We go through this like no ones business in our household. I’ve potted it up in 3 inch pots, 9 plants for me and about 6 for my sister. What we don’t eat of this, the chickens will, the same goes for Cabbages. The greenhouse is looking good now. I’ve still got one more section of staging to make up for the greenhouse at home, and then it’s the 7 for the greenhouse in the allotment!! 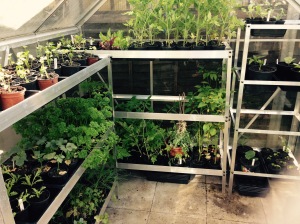 And just a little up date on my chickens. I know that lots of you have been asking how they’ve been getting on. Well here’s the latest. They’re still very stupid, but then they’re part of our family so what do you expect. They try and escape their run at any opportunity. They like being held, and peck at my trousers/leggings/shorts when ever they feel like it. But they’re laying eggs between 4-6 a day. They still stay out in the rain and wonder why they get wet, but love lemon sorrel and chase each other when one has a slug or a worm. To get this photo I had to hold some grass above the camera to get them to look up, don’t worry I gave it to them afterwards and they chased each other round their pen trying to take it off each other. 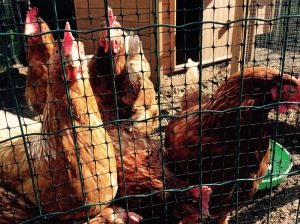 There are 6 chickens, honestly, but Giz is being squashed down the bottom of the picture.

It’s hard to imagine that they’re the same naked birds we got on February 7th this year.