Posted on April 23, 2015 by clairesallotment

I’ve been slowly sorting out my fruit bed which has been left to fend for itself over the last couple of year. But this year I’ve promised it that I’ll sort it out and bring some order back to it. Today I planted 12 new Raspberry canes “Glen Ample”. The canes that I did have, had lasted for about 10 years and were giving me fewer berries each year, so I thought that it was a time for some new ones. The new ones most probably won’t give me much fruit this year, but hopefully next year I’ll have loads and then I can make some Raspberry jam. We do like Raspberry jam, with pips and all!! Once they were in I finished digging over another large bed, and started on another. I had a stroll round my plots to see how many beds I’ve got left to dig over, and what state they’re all in. I was pleasantly surprised to find that the only really bad on is the one I’m working on at the moment, the rest are in a good way and just need a little bit of turning over. Oh, and the massive overhaul of the fruit bed of course. I feel that I’m ahead of the game at the moment which is good. I’m a little behind in sowing seeds though, so after work tomorrow morning I’ll try and catch up on those. I harvest the first of the Rhubarb and bought home some grass clumps for the chickens. Well they were very good girls today and laid 1 egg each. They’re such good girls. 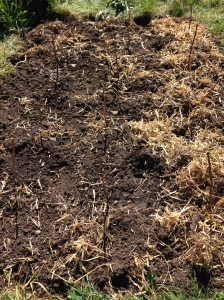 My new Raspberry canes. They don’t look like much now, but hopefully soon they will.