Posted on January 6, 2015 by clairesallotment

Now you hear that this is the Magic Kingdom “Happiest Place on Earth” and yes it is. There is something odd about this place, but in a good way. I don’t quite know what it is. I think the phrase I used was “Everything’s turned up to 11”. Everyone is so helpful, no one is grumpy, even when there are so many of you trying to move. Kids don’t scream, parents don’t shout at their screaming kids, everyone just gets on. The employees or “Cast Members” are all so thankful that you came, and also kept telling us to have a great rest of our day. Everyone is the same. I’ve never know so many polite and helpful people.

I was feeling so much better today, but was very selective on the rides I would go on for the rest of the holiday. I didn’t want a repeat of the day before. Mark and the kids went on a the Space Mountain ride which was unsuitable for me, so I had a wander around and met Mr Incredible, Frozone and Mrs Incredible who had got everyone dancing.

I suppose I look a bit like elastigirl, but not as stretchy.

We all went on Pirates of the Caribbean ride, which was gentle, so Claire friendly as we judged certain rides. Don’t worry the pirates didn’t eat the tourists. So that the kids didn’t miss out on all the rides they wanted to go on, we alternated from them going on a fast ride, to them accompanying me on a slow ride. I persuaded them all that we needed to go on “It’s a Small World”. Which is very gentle and relaxing, although the puppets are a little on the freaky side. It felt that you were hallucinating throughout the whole ride, and had been on  a massive drug induced trip. We also did the Jungle Cruise and various other rides. When the boys went on the scary “Splash Mountain” ride, Emily stayed with me, and we say the parade go past and I took loads of pictures. I won’t bore you with all of them, just one. 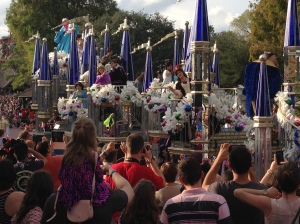 Look at all those lovely Disney princesses.

As we walked past the statue of Walt Disney which stands just in front of the famous castle, George said “He doesn’t look like Tom Hanks!” In amongst all the chaos you could find little places of quiet, but you had to seek them out. Then at the very end of the day we went in the Haunted Mansion which was fun. And just as we were about to leave they lit up the castle with goodness knows how many LED lights. A cast member informed us that it took the same amount of electricity to power all those lights as it would 2 fridges. I was very impressed.