Wednesday 3rd September 2014 – Onions are all up, and some rather large potatoes.

Posted on September 3, 2014 by clairesallotment

George is back to school today, and Emily tomorrow, but as they’re old enough and sensible enough (most of the time anyway) I can leave them at home and pop to the allotment. So that is exactly what I did this morning for about and hour and a half. I made up a box of goodies for my friend Clair who went out of her way to get me loads of manure, so as a “Thank you for some great poo”, I’ve made up a box of various bits from my plot and I’ll take it round to her later. I also dug up all my Onions. I’ve got loads to last us for quite a while, so that’s great news. Most of them have done really well, just the odd small one so I’m very pleased with them. When I got home I weighed some of the largest ones to see how heavy they are, and my largest is 8.1 oz. This I’m rather proud of, lots were around the 6 – 7 oz mark, so good sized ones this year. 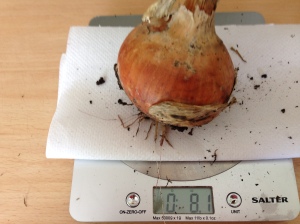 A rather good sized onion, even if I may say so myself.

I also pulled some more Rhubarb, which I’ll see if there are any takers at ringing tonight. I expect there will be, and then finally some more Potatoes. Which were all, what I would class as normal sized ones, until I dug up a rogue plant!! I won’t tell you what I said, but there may have a bit of a naughty word in the sentence. But I’m sure you’ll understand when I tell you that my 2nd heaviest potato today weighed 1lb 9 oz and the heaviest weighed 1lb 9.4 oz!! 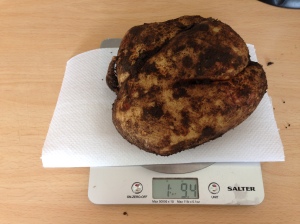 My what a whopper!!!

So that’s my heaviest potato ever, as last year I dug up. Last year I had one that weighed 1lb 7.8 oz. If I manage to dig up any that are heavier, I’ll let you know. Now I need to find somewhere to put all my Onions to dry for a month, before I put them in string bags. The greenhouse is rather full still, so I expect I’ll find space in one of my sheds. As long as it’s a frost free place they’ll be fine. 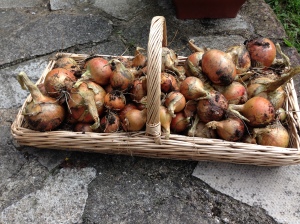 Oh and I have a new phone, as mine had a melt down, so I can put pictures up for you to see.

This entry was posted in Uncategorized and tagged claire's allotment, onion, potatoes, rhubarb. Bookmark the permalink.

13 Responses to Wednesday 3rd September 2014 – Onions are all up, and some rather large potatoes.