Girls can Paintball too you know!!

Posted on December 2, 2013 by clairesallotment

On 1st December, our daughter Emily was 14, so as her birthday treat we took her and her friend Paintballing at Delta Force. If you’ve never been, it’s really great fun. Just because I’m a mum, I wasn’t going to miss out, after all why should I? But as people arrived to form other teams, I was a little horrified by how few females were going to play. There must have been about 100 people playing in total, if not more, of which about 8 were teenage girls (of which Emily and her friend were 2 of them), and 2 were grown women (I was one of them). So that’s 10 females playing, and all the rest were MEN!! There were some women my age, but they just stayed at Base camp and didn’t play.
Now just incase you were wondering, women are allowed, and can play with a paintballing gun. We’re very good at it. I must have shot about 6 people, and only got shot myself twice. Out of 12 games I think that was very good. As females we may be a little more careful, but we think about what we’re going to do and are very methodical. Unlike most of the GROWN MEN who don’t think, and just run straight at the other team, and then get all cross when they get shot. Us women hide, and sneak up on the opposing team from behind, and shoot them when they least expect it, hehehe! We were the brown team, and thrashed the green team 38 to 70, or something like that. The kids (Emily, Theresa and George) as well as Mark and myself had loads of fun, but the tops of my thighs are a little stiff today. As Mark and I were walking back to base camp with out helmets on, one of the “Marshalls” with us went past us saying “Excuse me lads”. I then replied “I’m a girl!!” We arrived at the Paintballing session at 9am, and finished at 4pm. We then came back to our house for a special dinner, and cupcakes for pudding. Mark then took Emily’s friend home for 9pm. I think an early night is in store this evening. 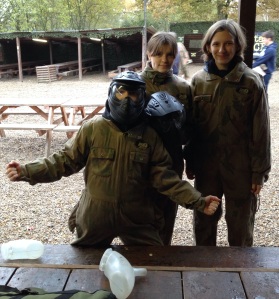 Emily, Theresa and George, all kitted up for Paintballing.

This entry was posted in Uncategorized and tagged claire's allotment, Delta Force, paintballing. Bookmark the permalink.